I have always known that my family name was not of Danish origin, but I did not start researching it until I was an adult. I simply searched for the name Kottal on the Yellow Pages and saw that there are a lot of people with that name. That was the seed for the creation of my family tree.

My research thereby started with a surge for finding my father's lineage, whose first generation in Denmark was my father's father's parents. None of them were, in fact, Danish, since my great grandfather, Maximilian Kottal, was from former Bohemia, and my great grandmother, Anna Maria Söderlund, was from Finland. Both came from families working within the glass industry..

Later I learned that my mother's mother's cousin, Eigil Juhl, had made a genealogical table for my mother's mother's father, Niels Hansen Sørensen Juhl, and thereafter I also started have an interest in my Danish roots. My mother's mother, Jenny Kristine Juhl, loved to tell stories about her family and left behind an enormous amount of photos of both close and distant relatives. Besides she was a kind of immigrant herself, because she moved from the small town Holsted in Jutland to Odense, the capital of Fünen. Odense may not seem that large today, however, at that time it was a great step, when moving from countryside to a city.

My middle name, Draeby, comes from my father's mother, Grete Dræby Kottal, whose family history gives insight into the Danish feudal system and the class divisions of the past. They resulted in her father's father, Frederik Kristiansen, growing up without his father, Frederik Dræby, who was of considerably higher class than Frederik Kristiansen's mother, Dorthea Magrete Rasmusdatter. 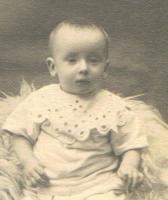 As I became comfortable using the Danish archives, it soon became at least as interesting to search for my Danish roots as my foreign ones. My mother's father, Helge Løve Hansen, has roots from both Fünen and Jutland. My search through his lineage also brought me across the Sound to Sweden, where both his father's father, Sven Olof Hansson, and his father's mother, Brita Lovisa Johansson, were born. Appearently, Denmark was good at attracting foreign workers at that time.

On 1 May 2010 I was married to Søren Nielsen, and we then both changed our last names to Kottal-Nielsen. Søren's family also finds genealogy interesting, so as stories are told and old photos are located, the amount of information about his family increases. Furthermore, we look forward to having children and thereby passing on our roots through the Kottal-Nielsen surname.

Søren's father's grandfather Hans Ejnar Petersen was from the Danish insel Lolland, but as a young man he moved to Nothern Fünen, where he started a family with Maria Magdalena Hansen. We still don't have a lot of information about Maria Magdalena's ancestors, because her grandfather Carl Christian August Hansen was from Schleswig-Holstein. In fact, we don't even know for sure whether he was christened Hansen or Larsen, because some sources use one of the surnames and others the other. His father's name was Lars Hansen, and the regulations regarding surnames were changed during the years leading up to the birth of Carl Christian August, so therefore he may have been christened either one of those surnames.

As I have mentioned, I am not the only one in my family looking for our roots. Two of my cousins have also made a web site. Whereas their site focuses on the Kottal family, I have chosen to include my entire family. It is an extensive project, and therfore I would very much like to hear from others researching the same names, so we might exchange information.

I have no intention of stepping on anyone's toes. If I have written anything on this site, which you do not want to be published, then contact me and we will find a solution to satisfy both of us.